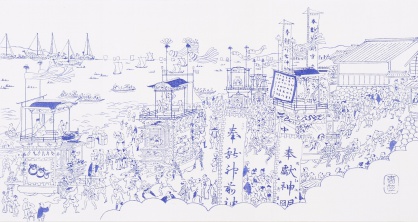 The Shiohi-matsuri Festival is held for two days in early May every year. This festival was named after the legend of Emperor Jimmu’s arrival on this land from the sea during his eastern expedition, and started with the drawing of five parade floats to the beach to pay respects to Emperor Jimmu as the deity of the festival. The five parade floats lined up on the beach at ebb tide are brave and splendid, and they look as if flowers were in bloom on the beach.
The origin of this festival is not certain. There is a legend that 18 samurai families who moved to the land of Kamezaki started the festival during the Japanese eras of Onin and Bummei (late in the 15th century) and that they set up small bamboos like a cart, put a curtain stained with a shrine emblem on it, and towed it in town with a musical accompaniment. Experts tracked back the history of the festival to the Japanese eras of Genroku through Horeki (from the end of the 17th century to the early 18th century) with various historical materials in their recent survey. Since then, it has become evident that the style and tradition of the festival have been inherited firmly for over 300 years.

History and Technology of Parade Floats 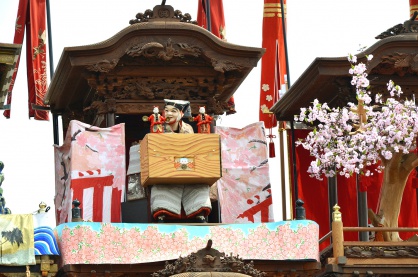 The parade floats have been rebuilt or repaired many times as they came to take today’s appearance. The existing parade floats are decorated with ornaments―exquisite carvings by skilled artists (including Washiro-Tomimasa Tatekawa, Jisuke Segawa, Tsunejiro Niimi [nicknamed Horitsune], and Kyuichi Takeuchi), luxurious curtains based on the masterpieces of famous painters (including Ganku and Suiko), four pillars with lacquer craft works, red lacquerware with patterns carved in relief, and cloisonne ware. Furthermore, elaborate mechanical dolls gorgeously dance and cross cherry tree branches on all the parade floats. The performance of the Takeda Puppeteers, who are said to be living fossils of Takeda, is a must-see. It can be said that the five parade floats of the Shiohi-matsuri Festival were created by bringing together the trends of the cultures at the end of the Tokugawa period in and after the Japanese eras of Bunka and Bunsei. 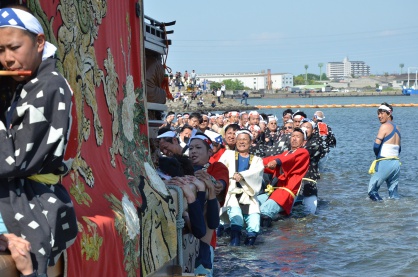 Due to revetment maintenance after the Ise Bay Typhoon in 1959 as postwar Japan’s second-worst natural disaster, the drawing of the parade floats on the beach was suspended for a long time. However, an artificial beach was completed in front of Kamisaki Shrine in 1993, and the brave festival involving the drawing of the parade floats was revived. Although there is a nationwide shortage in people working to support festivals, the Shiohi-matsuri Festival has been firmly maintained by a strong group of supporters since ancient times. Furthermore, the passion of the supporters of this festival has been making the festival increasingly popular every year, with the tradition of prohibition to women maintained. 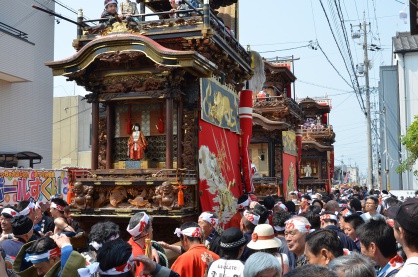 In 1966, Aichi Prefecture designated the five floats as tangible folk cultural properties. Taking the opportunity, a trend to reevaluate the cultural and historical values of the Shiohi-matsuri Festival was born. Each float group restored or renewed the mechanical dolls after a prolonged period of performance suspension due to the breakage or loss of them. Each of the five parade floats dedicated two types of mechanical dolls on the front shelf and top of the float. Furthermore, the curtains, carvings, and other ornaments were restored or renewed, and the festival supporters’ consciousness has been increasing year by year to protect and hand over the tangible and intangible properties inherited from their predecessors for the future.
Under these circumstances, the parade float event of Kamezaki’s Shiohi-matsuri Festival was designated as a long-awaited important intangible folk cultural property in 2006. In 2016, i.e., ten years later, 33 traditional festivals, including this festival, from across Japan have been added to UNESCO’s Intangible Cultural Heritage list.